New Albany’s preeminence as a boat building center in the early years of its history gave rise to its later reputation as a city of iron works, for boats needed boilers and engines, and foundries soon sprang up to meet the need. The Morton & Cox Foundry, established on the river front about 1825 by two enterprising partners from Cincinnati, was the first and for many years was probably the only one. But later, as steamboat building grew in importance, the foundry business expanded.

In 1843 the Morton & Cox Foundry was taken over by Lent, South & Shipman and became well-known up and down the river under its trade name of the Phoenix Foundry. One-hundred and 50 men were employed at the Phoenix. Other iron workers found employment at the American Foundry, owned by Peter Tellon, and at the foundry of Phillips, Hise & Co.

But the Civil War, which brought an end to boat building in New Albany, likewise had a profound influence on iron working in the city – an opposite influence. With the end of steamboat building, New Albany capital sought other fields of investment. The experience gained by the foundries in building steamboat engines and boilers, as well as other types of machinery, seemed to point the way. And, as the 1860s drew to a close, the sprawling buildings and smoke-belching stacks along the river front announced that a new industrial day had dawned for the city – the smaller foundries of an earlier day were giving way to the rolling mills and iron works of a new age.

Two industrial giants dominated the iron working field in New Albany in the late 19th Century – the New Albany Rolling Mills and the Ohio Falls Iron Works. The Iron Works was controlled by Washington C. DePauw, a capitalist who invested in many business and industrial enterprises at that time. The Iron Works produced bridge girders, iron bars, cast iron fronts for buildings, nails, spikes and other assorted iron products. The first bridge over the Ohio River in the Falls Cities area – the Pennsylvania Railroad Bridge – was built with girders from the Iron Works.

The Rolling Mill, owned by Bragdon & Co., specialized in railroad rails and could turn out 100 tons per day. Much of the output of the mill went to the South for rebuilding railroads destroyed during the Civil War. New railroads in this area, such as the St. Louis Air Line, provided a market also and in the days when city street car lines were being built at a rapid rate the mill did a flourishing business in trolley rails. The rolling mill also turned out large quantities of sheet iron.

Smaller iron-working enterprises also flourished. The New Albany Foundry, dating back before the Civil War, was in business as Webster & Pitt. Zier & Co., founded during the war years, turned out boilers. The Western Axe & Edge Tool Works started business in 1869. The axe handles, ironically, were provided by Hill & Co., which in earlier times had built the hulls for some of the most famous river steamers. 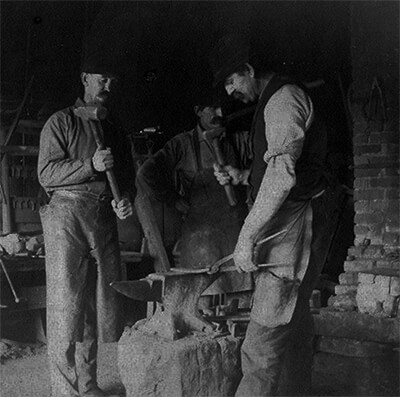 The New Albany Manufacturing Co., founded in 1874 by Washington DePauw and Charles Hegewald, specialized in saw and derrick machines for stone quarries. The best customers were the quarries at Bedford, Indiana. Later, in 1889, Hegewald set up his own business making boilers, marine engines and various types of iron castings. He had come from Germany in 1853 and had been foreman of the old American Foundry for Peter Tellon.

It was an impressive industrial picture, but as the 19th Century drew to a close the two giants of the New Albany iron industry found themselves in trouble. Steel was beginning to replace iron in many applications, and railroad building was reaching a saturation point. A remedy was sought in consolidation. In 1899 the two concerns merged as the Ohio Falls Iron Co. Under aggressive management the new company was able to tap many new markets; and employment at the time of World War I stood at 800.

The plant continued as New Albany’s largest employer all through the 1920s, but the economic depression of the 1930s spelled its doom. Today the flood wall has obliterated all traces of the ironworks which have joined the shipyards as part of the thread from which the fabric of New Albany history has been woven.