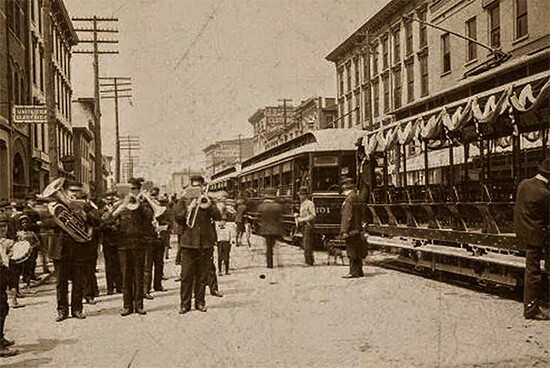 The sound of singing trolley wires announced its coming . . . then the faroff melodious tones of the air horn breaking the still night air . . . then the piercing gleam of the big headlight reflecting on the twin ribbons of rail as it came closer and then swept by with controller wide open – that was the “Hoosier Flier” flashing through the Indiana countryside in the days when the electric interurban line connected the Falls Cities and Indianapolis.

In 1900 there were only one or two interurban lines. Ten years later they covered the Midwest and much of the East in a far-flung network that made it possible to travel from any of the Falls Cities to such distant points as Chicago, Milwaukee, Pittsburgh, Detroit, Cleveland, Buffalo, Rochester . . . even, with one small gap, to New York City and to Boston and New England – all by interurban car.

The line linking the Falls Cities and Indianapolis was built in segments, with the final link between Sellersburg and Seymour completed late in 1907. With the line opened the entire distance, the famous limited cars took to the rails – the “Hoosier Flyer” northbound and the “Dixie Flyer” southbound.

The flyers were speedy, too . . . three hours from downtown Louisville to downtown Indianapolis, with numerous stops along the way. The interurban car opened a new era in transportation along its route. With its ability to “stop on a dime” and roar quickly away, it could pick up and let off passengers at every wayside stop and country road and never lose its stride. It made possible the first real break in rural isolation before the day of the automobile. Rolling through the heart of towns and cities on its route, the interurban provided a convenience the older steam railroads could not meet. 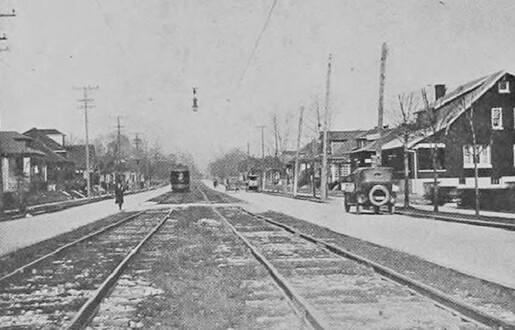 Passengers were the stock in trade of the interurban, but freight was a big item, also. For years the line operated “Strawberry Specials” from Floyd County during the berry-picking season. Trains of five to seven freight cars left New Albany each night at 8, and the fresh-picked Floyd County berries were on the Indianapolis produce market at daybreak. Livestock shipments were another important revenue producer and the line had a track directly into the Bourbon Stockyards in Louisville.

Business was good in the early days – so good that by the middle 1920s deluxe dining and parlor cars were operated, plus overnight sleeping cars which were especially popular with traveling sales representatives who could combine travel and sleep in one package.

The line when first opened was called the Indianapolis & Louisville Traction, but in 1912 it became the Interstate Public Service. In 1930, when the private auto became a serious threat, the line became a part of the Indiana Railroad, a new company organized as a valiant effort to save the interurban lines throughout the Hoosier state by grouping them together. 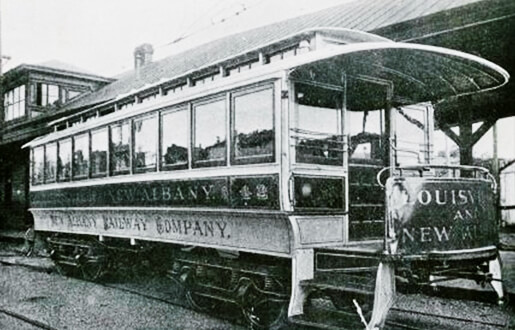 Part of the program of the Indiana Railroad was to cut costs by installing new lightweight cars which used less power, needed only one crewman, and gave a smoother ride than the old cars. Some of the new cars, constructed of aluminum, were built at the American Car & Foundry plant in Jeffersonville, the last cars ever built there.

The sleeping and dining car service was eliminated and fares were slashed to the bone - $2.95 for a round-trip between Louisville and Indianapolis. The new company had high hopes of maintaining the interurban lines, even in the face of economic depression and the rapid increase in automobiles.

But despite excellent service and low fares, the effort did not succeed. There was just not enough revenue to maintain track and wires and meet the heavy real estate taxes on the right-of-way. So finally, in 1939, the line became history. On October 31 of that year the last car, with a rosette crepe on the front nosed out of the Louisville terminal, rolled across the Big Four Bridge to Jeffersonville, and raced north through the night to oblivion. The era of the traction line was over.