AS OTHERS SAW NEW ALBANY 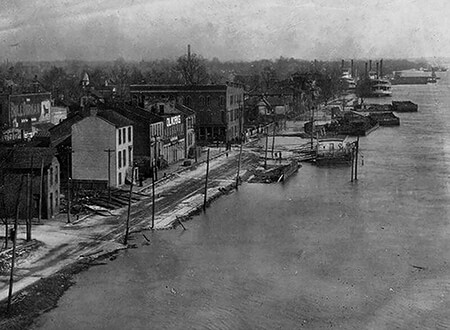 In 1817, when New Albany was only four years old, the struggling village received its first mention in a book of travel. The author, a man named Palmer, wasted no words. “New Albany has been puffed through the Union,” he wrote, describing the advertising the Scribner brothers had placed throughout the country, but added that the town had “not yet realized the expectations of the proprietors.”

The next year the Rev. Isaac Reed, New Albany’s first Presbyterian minister, looked about his new location, then wrote a letter to a friend. “New Albany,” he said, “is now rude in appearance and has few good houses, but it is fast improving.” In 1819 Richard Lee Mason came through town, but wasn’t impressed. He used only thirteen words for his description . . . “Passed through New Albany, a little village inhabited by tavern-keepers and mechanics.”

Had Mr. Mason stopped at one of those taverns he might have found more to write about, for later that year an English traveler wrote, “I crossed the Ohio at Portland and landed at New Albany, a rising young village, to breakfast, where for the first time in America I found fine, sweet, white home-baked bread.”

The taverns also impressed William Corbett, an 1828 traveler who stopped at Jenkins’ Tavern and wrote that it was “the best tavern we have found in Indiana, that at Harmony excepted.” Indications that the town was growing are found in the account of another 1828 visitor, an Austrian, who recorded that he found “a great deal of activity.”

It was not until 1840, when New Albany was the largest city in Indiana, that a visitor wrote at any length on his impressions. He was John Parsons of Virginia who was delighted with the city.

"I had known when I stood on the Knobs and I looked over the country that I should love New Albany,” he wrote home. “Even there, I felt its charm; how much more as we drove over its broad streets and drew up before Hale’s Tavern, one of the best taverns, the driver had already informed me, west of the Allegheny Mountains.”

Steamboat building was then New Albany’s big business and Parsons wrote that it was this “and the fact that the city is a headquarters for river men that give it so different an atmosphere from other cities I have visited, for there is a constant stream of merchandise from New Orleans and in many respects its atmosphere is that of a southern city.”

The Civil War dealt a death blow to the old river traffic and New Albany began to take on the look of a factory town, but still retained much of its earlier atmosphere. In 1876 a letter appeared in a Rochester, New York newspaper written by a Rochester couple who had moved to New Albany the year before. They tell us how the city looked to others then.

“New Albany is an old town,” they wrote, “venerable in years compared to Rochester . . . but for the large manufactories located here – the famous glass works, largest in the United States, a woolen mill, iron mills and hickory mills, every tall chimney belching forth clouds of coal smoke that blackens everything, New Albany would be nothing more than a suburban retreat. Its business streets are tranquilizing, even on market day . . . . One or two millionaires reside here and there are many fine residences with well-kept grounds . . . It is badly paved, sparsely shaded . . . goats, cows, geese and even mules have the freedom of the public streets. It is nothing remarkable to see a goat basking on a sunny doorstep or to have the pigs obstruct your promenade.” 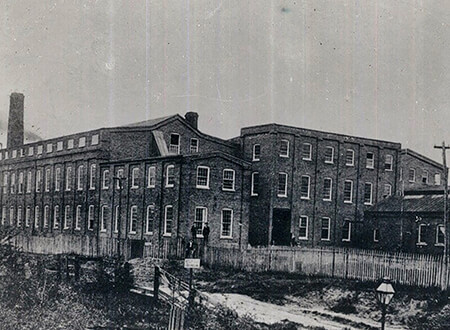 But the Rochester couple found one thing to their liking. “The Knobs are the redeeming feature,” they wrote. “Scarcely a week has passed that we have not pulled up some of their rough roads to pant out our undying admiration of the landscape scene.”

A few years later a roving correspondent of the Chicago Times visited New Albany and wrote with malicious humor his impressions. “New Albany is noted principally for her extensive manufacturing establishments. Every other man you meet carries a basket and is searching for the glass works . . . In many respects New Albany is a big country village with city clothes on. Everybody knows everybody, and everybody goes to the circus.