THE LEGEND OF THE ROBERT E. LEE 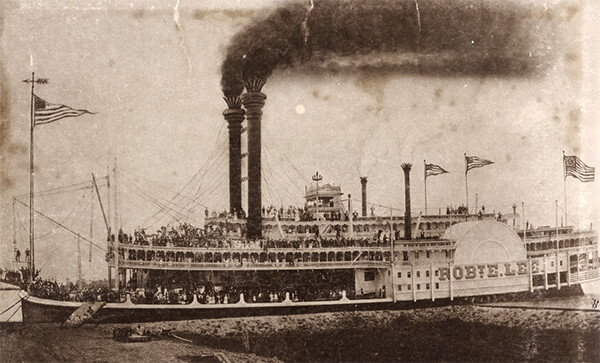 The Robert E. Lee Steamboat was nicknamed the "Monarch of the Mississippi" and built in New Albany, Indiana in 1866 for a price of $200,000. The grand steamboat was 297 feet by 49 feet. While the name was being painted on the ship it was moved over to the Kentucky shore as some Hoosiers resented the name of the rebel leader being used.

On June 30, 1870 the steamboat left New Orleans in a race against the Natchez to St. Louis.  At the time the Natchez was the then-current speed record holder.  The Henry Tate, MayFlower, Mary Alice and Tahlequah preceded the two steamboats up the river for a way with excursionists in order to be able to view the race. The Robert E. Lee won with the time of 3 days, 18 hours, 14 minutes.

She was eventually dismantled in Jeffersonville, Indiana, in the spring of 1876, to build the Robert E. Lee (2nd).

"The cabin and outfit of this great southern steamer surpasses that of any boat that has yet graced the trade, and her accommodations are on the same scale of grandeur and magnificence. She has sixty one staterooms in the main cabin, twenty four extra rooms in the texas for passengers, a nursery for servants and children, and a cabin adjoining the nursery in which are staterooms for fifty passengers. … The main cabin carpet is a single piece 17 ½ feet wide and upwards of 225 feet (69 m) in length, a royal Winton velvet purchased of A. T. Stewart of New York and made to order. The furniture also made to order, all of modern style and costly materials in fact solid rosewood, the chairs, sofas, sociables, etc., most artistically and elaborately carved. The cushions of all seats are heavy crimson satin, and the style of the furniture is of new and original design, all made in this city at the manufactory of John Sim. She has 20 extension dining tables in the main cabin, each to accommodate twelve guests; thus seating 240 for dinner with plenty of room for extra side tables. … The machinery of the ROB'T. E. LEE consists of feet stroke, the largest high pressure engines on the river. … The doctor is considered a triumph of the medical art, it being a new style of with the parallel motion applied. It supplies the boiler with water and can throw an immense volume. The boat is also furnished with three separate pumping fire engines with an abundance of hose to use in case of fire. … She has wrought iron shafts weighing 18,750 pounds, the shafts being each 23 feet (7.0 m) in length, with the journals 18 inches (460 mm) in diameter. Each of the cranks, which are also of wrought iron, weigh 6,000 pounds. These were all made east of the Alleghenies and are the largest ever constructed for a western steamer. The texas is 140 feet (43 m) in length, with 24 passengers rooms in addition to the accommodations for officers. She also has two immense baggage rooms, all under guard. … to obviate the necessary of carrying baggage in the cabins or on guard. … The cabin with its rich garniture and splendid furniture, dazzling chandeliers, arched and fretted ceilings, etched with gold, stained glass skylights, immense mirrors, the velvet carpet, the pure zinc white of sides, the rosewood state room doors, and the imitation Egyptian marble stills, all combined to make it bear an appearance of Oriental luxury and splendor seldom conceived an never before seen floating the wild waters of this so-called semi-barbarian western world. "