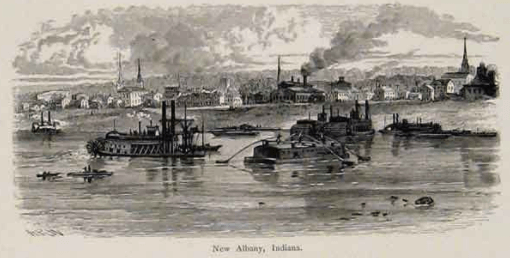 “This town is just laid out, with spacious streets, public squares, markets, etc. It is situated on the bank of the Ohio River, at the crossing place from Louisville to Vincennes, about two miles below the falls, in the Indiana Territory, and affords a beautiful and commodious harbor.  The beauty of the prospect is not surpassed by ANY in the Western country…”

(This is part of an advertisement that the founders of New Albany; Joel, Abner and Nathaniel Scribner used to advertise their new town in 1813.)

Two years later there were 68 buildings located in the town including a post office, sawmill and gristmill. In 1818, New Albany constructed its first of many steamboats. And by 1850, and for almost 30 years, New Albany was the largest city in the state of Indiana, not only in population, but also in commerce and wealth! During this period of time, the downtown was home to numerous wholesale and retail establishments and fortunately, many of these business houses remain today in the Downtown New Albany National Register Historic District.

Some of the businesses in New Albany in its first century of existence:

Crupper manufacturing (A crupper is a a strap buckled to the back of a saddle and looped under the horse's tail to prevent the saddle or harness from slipping forward.)

Woodworking of all kinds